Laetitia with Morvargh (the Cornish name for Seahorse) 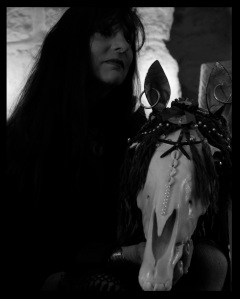 At the start of 2017 Laetitia contemplated acquiring an ‘Obby ‘Oss of her own. A smaller ‘Oss skull would be ideal so that she could also be a rider. Laetitia originally searched for the skull of a small horse asking the advice of David Pitt who owns and rides Coppertown Mari. She then discovered the skull of an Icelandic foal with Viking heritage, a significant find as Laetitia’s place of birth was on the site of an ancient Viking settlement.

Here is an article about horses in Anglo Saxon and ancient Viking history:

Where is the horse gone? Where the rider? (The Wanderer)

Both Anglo-Saxon and Scandinavian warriors, particularly nobles, loved their horses. They might prefer to fight on foot, swinging sword or axe with their men (unlike the Normans) but to own a horse meant status, rather like owning an expensive car does today. A king might direct a battle from the saddle but most of the valuable steeds would be led to the rear, safe from harm, before a battle. When asked to fight as cavalry in the early 11th century, ‘against their custom’, English warriors were so uncomfortable that they preferred flight. A mounted knight, isolated high in his saddle, cannot be one with his men. Perhaps it is this factor which led, following the Norman conquest, to the terrible widening of the social gulf betwixt noble and yeoman; a distance which had been relatively small in comparison in the egalitarian days prior to 1066.

Here I will discuss the horse and its place in pre-Conquest England.

The horse (Equus ferus caballus) is thought to have been first domesticated in Central Asia as early as 3,500 BCE. By 2,000 BCE, there is good evidence of the domesticated horse in North-West Europe. The use of the horse has been linked to the rapid expansion of the Proto-Indo-European speaking Battle-Axe culture in the late Neolithic. During the Nordic Bronze Age, horses were relatively small and predominantly used to pull chariots.

The horse of the Iron Age was still relatively small, perhaps 12.2 to 14.2 hands high (a ‘hand’ = 4 inches) This was smaller than modern riding horses, which range from 14.2 to 17.2 hands. However, such small horses were used successfully as light cavalry for many centuries. Modern Fell ponies, believed by some to be descended from Roman cavalry horses, are comfortably able to carry fully grown adults.

It has been estimated that the average size of the Anglo-Saxon horse was 14 hands.

Horses in the ‘Viking age’ probably resembled modern Icelandic horses. They are small (14.5 hands), but very sturdy and strong.

Viking horses were taken to Iceland from Norway around 900 CE and have been maintained as a pure breed there. These sturdy horses have two unusual extra gaits in addition to Walk, Trot and Canter. Tölt, a 4-beat gait, also known as running walk, is very smooth and comfortable for the rider. In Flying Pace, a 2-beat gait used for racing, the horse can reach speeds of 30 mph. An Icelandic horse in action looks like it really does have eight legs and this is the most likely reason for portrayals of Sleipnir with 8 legs.

The modern English word ‘horse’ is derived from the Old English

hors, which derives from Proto-Germanic *hursa– (compare Old Norse hross and Old High German hros). The exact origin is unknown but is thought to mean “the swift (runner)” and related to the Proto-Indo-European root *kurs-.

The original Proto-Indo-European name would have been *ekwo, (hence the Latin equus) but as with many other animals, this was changed by taboo deformation in favour of the synonym. However, in Old English the word eh /eoh for horse does persist, probably because the horse’s ritual significance and its being the name for the rune M –‘e’ (derived from Proto-Germanic *ehwaz) comparable to the Old Norse jo’r.

Other Anglo-Saxon words for horses include three for stallion;

stódhors, from Old English stód – “herd of horses, place where horses are kept for breeding,” from Proto-Germanic *stodo, from Proto-Indo-European root *sta– “to stand”.

Mare, meaning a mature female horse, derives from the Old English mere (Mercian), myre (West Saxon), the feminine form of mearh “horse,” from Proto-Germanic *markhjon– said to be of Gaulish origin (compare Irish and Gaelic marc, Welsh march and Breton marh “horse”). There are no known cognates beyond Germanic and Celtic and I am fairly sure that this is a Celtic borrowing into English. The Old Norse form would be marr.

Roles of the Horse

The horse’s primary role has always been that of providing a swift form of transport. Although providing personal transport, (either ridden or via a chariot) the horse has also been utilised to transport goods as a pack-horse (ealfara) or to pull a cart or wagon (crætehors).

For the noble, the horse would be essential when hunting or hawking and it would be during these activities that he would hone his equestrian skills.

Because it offers swift transport, the horse has always been utilised for sending messages. The Mercians had a specific name for a mounted servant : a pre-7th Century word : radcniht (meaning ‘riding servant’. The Old English word cniht originally merely meant serving boy and only much later in the Middle Ages came to mean a tenant bound to serve his lord as a mounted soldier).

Even the predominantly infantry-based armies of England and Scandinavia needed horsemen to fulfil the traditional roles of light cavalry; scouting and pursuit. Mostly, the mounted troop (éored) would be un-armoured and be armed only with a spear and sax. Such a horseman would be called an éoredman in Old English or a ridda / ridere. In Old Norse he would be a riddari.

These mounted elite warriors are mentioned by the 6th century Goth scholar Jordanes, who wrote that the Swedes had the best horses beside the Thuringians. The Norse sagas also describe king Adils as always fighting on horseback (both against Áli and Hrólf Kraki). Snorri Sturluson wrote that Adils had the best horses of his days.Uniquely the Swedish Vendel Age was characterised by the appearance of well-equipped aristocratic warriors who fought on horseback. The finds in Vendel and Valsgärde show that Uppland was an important and powerful area consistent with the sagas’ account of the Swedish kingdom. Some of the wealth was probably acquired through the control of mining and production of iron. The rulers had troops of elite mounted warriors with costly armour and ornate helmets and swords. Graves of mounted warriors have been found with stirrups and saddle ornaments in gilded bronze with encrusted garnets.

Horse worship in Northern Europe dates back to the Bronze Age. The horse, particularly the white horse, was seen as a sacred and magical animal associated with a particular god or as a totem of the warrior-king. Many Indo-European religious branches show evidence for horse sacrifice, and comparative mythology suggests that they derive from an original Proto-Indo-European ritual.

Pagan reverence of the horse, including its phallus, seems to have been linked to the worship of the fertility god Frea Ing / Yngvi Freyr and so outraged the Catholic Church that a complete ban was imposed in Northern and Western Europe against religious recognition or veneration of the horse in any form.

It was vital to ensure the skull was in good condition for Laetitia’s requirements and as David Pitt had ‘birthed’ a number of ‘Obby ‘Osses into the folk world, she immediately sent it to him after purchase. David kept her updated with video footage explaining the work required to make it robust for riding. He explained the skull’s condition and noticed that the adult teeth were still embedded deep within the jaw as they had not yet emerged. (This Icelandic foal was born and bred on a farm, but unfortunately they do not always survive the severe weather or they are undernourished.)

David worked on the foal in his free time over a period of 3 months and when the skull had been prepared, he constructed silver ears and a tongue.  Laetitia sent him shiny teal baubles for the eyes that he attached inside the eye sockets. David also constructed a pole along with fixtures and fittings for riding enabling the jaw with a wonderful ‘snap’. 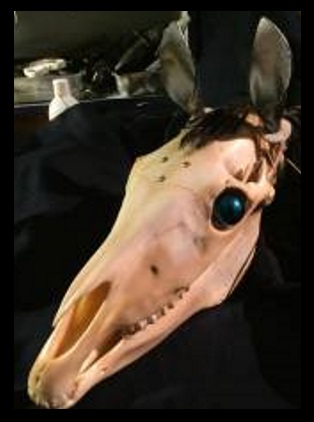 A good friend Craig Weatherill informed Laetitia the Cornish name for seahorse was ‘Morvargh’. She had given the ‘Oss’ image a lot of thought and decided that it would naturally blend with her work and connection to the sea.

The three months that passed without seeing or holding Morvargh was a little frustrating, but Laetitia knew her ‘Oss was in expert hands! David Pitt kindly travelled from Wales to deliver her in person at Beltane 2017. 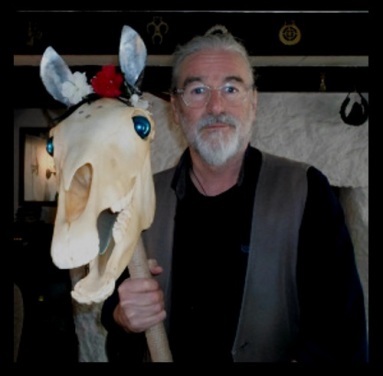 He was accompanied by his beautiful Coppertown Mari. They had dinner together at the local pub the St Buryan Inn and then visited Boscawen-un stone circle together.  Cassandra had the wonderful experience of riding Coppertown while David filmed video footage of them.

When David left, it was then time for Laetitia to work on Morvargh. She had already created a new dress for Penkevyll with her new mane and tatters plus two new hearth dolls, so the creative energy was flowing well.

Laetitia began work on the mane by fitting blue Hessian material to the skull. She then had the lengthy task of braiding strands of wool until she had constructed 40 braids from two large balls of wool. The braids were then sewn to the hessian.

When the mane was complete, Laetitia attached 120 pearls to it plus large mother of pearl shells along the centre parting. 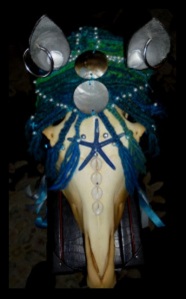 She added a starfish and shells to the skull using a glue recommended by her wonderful friends John and Sue Exton who have had plenty of experience in decorating Mari Celeste  and Mari Seren. Ribbons were tied at the sides of the skull along with cockleshells that make a wonderful sound. There are Pirate rings in the ears and the teal dress was constructed from a sheet and netted material.

Morvargh was the first Sea ‘Oss to be created in West Cornwall and her debut was at Penberth Cove on a beautiful warm sunny day. 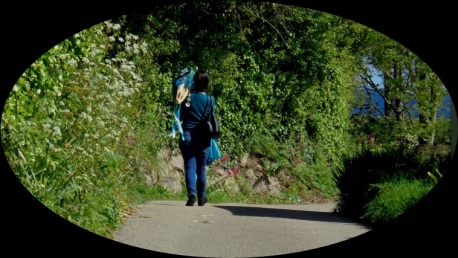 It was a wonderful experience for Laetitia to introduce Morvargh to the sea. Their bond has strengthened during the time she worked on the image and they naturally merged together as one.

Laetitia found riding Morvargh an extraordinary experience as the ground ahead is visible when walking over the stones as the ‘Oss dress is open at the front as the netting has since been removed. Even though the material is made of thin cotton,  it can get surprisingly warm in there. 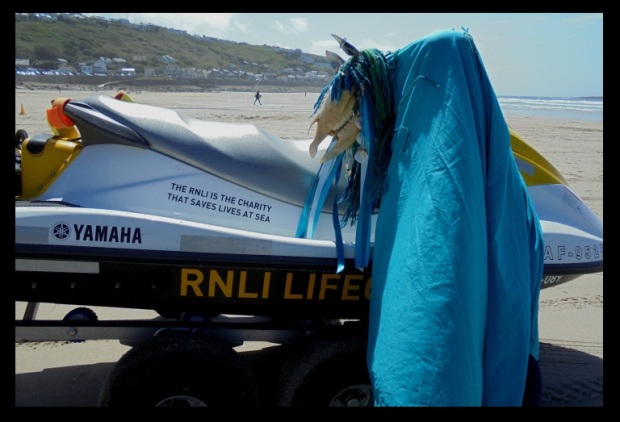 Morvargh visits festivals and events when Penkevyll is not available and occasionally they appear together.  Laetitia will update you on their adventures.  There is also a Facebook page

See the following video footage of Morvargh dancing to a Samba Band at Tintagel Carnival 2017. This gave Laetitia a wonderful ‘work-out’!

…and performance with the wonderful Mole and Wreckers Morris. 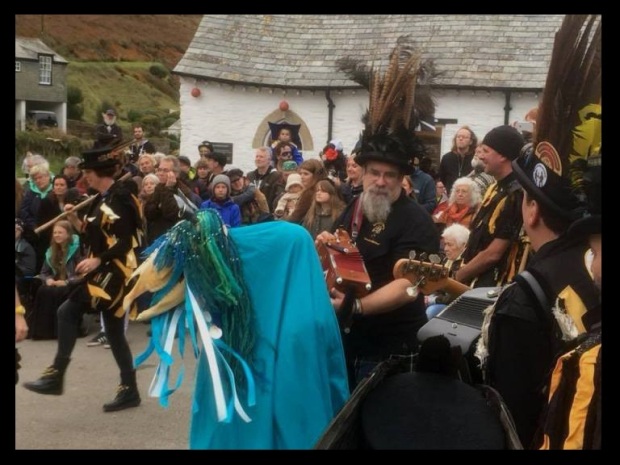 Read her about her first appearance at the Chepstow Wassail

An extra special thank you to the wonderful David Pitt for all his hard work and preparation, also to lovely Craig Weatherall who helped name her and fabulous John and Sue Exton for helpful hints in decoration of ‘Osses. Thank you also to Cassandra Latham Jones for her support.

We will be seeing you soon…….

8 thoughts on “Rider of Morvargh the Sea ‘Oss”