The latter half of summer had been rather busy for Cornwall and even though this was welcomed to help the economy, it also included some aggressive and thoughtless behaviour from many visitors. I can almost hear the land and sea breathing a ‘sigh of relief’ as summer turns to autumn and life returns to a more peaceful and slower pace.

Cassandra and I have been occupied with distant work for clients, however during August and in September we were able to see clients in person for socially distant readings, workshops and courses.

Autumn Equinox was overcast weather-wise, but it was dry which enabled Cassandra to venture out onto the land where she harvested local blackberries, apples and autumn leaves. Meanwhile I swept the hearth and prepared the fireplace, in preparation for our evening celebration.

We had time to bake a wonderful apple and blackberry crumble containing seasonal spices of cinnamon and cloves, before keeping an appointment with one of our clients.

We were given a wonderful opportunity by the new owners of Caer Bran Hillfort to bless their land. The following article has information about the site:

During the Iron Age a variety of different types of settlement were constructed and occupied in south western England. At the top of the settlement hierarchy were hillforts built in prominent locations. In addition to these a group of smaller sites, known as defended settlements, were also constructed. Some of these were located on hilltops, others in less prominent positions. They are generally smaller than the hillforts, sometimes with an enclosed area of less than 1ha. The enclosing defences were of earthen construction. Univallate sites have a single bank and ditch, multivallate sites more than one. At some sites these earthen ramparts represent a second phase of defence, the first having been a timber fence or palisade. Where excavated, evidence of stone- or timber-built houses has been found within the enclosures, which, in contrast to the hillfort sites, would have been occupied by small communities, perhaps no more than a single family group. Defended settlements are a rare monument type. They were an important element of the settlement pattern, particularly in the upland areas of south western England, and are integral to any study of the developing use of fortified settlements during this period. Despite subsequent mining activities and the bisection of the fort by a later track, the Iron Age defended settlement, 330m south east of Caer Bran Farm survives comparatively well and will contain archaeological and environmental evidence relating to its construction, development, strategic importance, agricultural practices, social organisation, domestic arrangements and overall landscape context.

The monument includes an Iron Age defended settlement, situated at the summit of the prominent hill Caer Bran. The settlement survives as a roughly-circular enclosure defined by two concentric lines of defence, the inner formed by a rampart and ditch and the outer by an inner ditch, rampart, outer ditch and counterscarp bank. The defences survive differentially; the inner rampart and ditch are much slighter in construction than the outer defences, the rampart of which is up to 4.6m high. The outer defences survive best to the north. Within the interior are the low rubble walls of at least two stone hut circles. The best preserved is centrally located and measures approximately 16m in diameter. This hut circle and the fort have been bisected by a later track, and much of the interior has an irregular appearance caused by numerous pits and spoil heaps associated with mineral prospecting and extraction from the medieval period onwards.
Other archaeological remains in the immediate vicinity are the subject of separate schedulings.

This monument is scheduled under the Ancient Monuments and Archaeological Areas Act 1979 as amended as it appears to the Secretary of State to be of national importance. This entry is a copy, the original is held by the Department for Digital, Culture, Media and Sport.

Our blessing ritual was simple, however it also had potency as we experienced positive reactions from the elements to our invocations.

The owners were keen to show us around the site particularly the quarry, where tangible energies of elementals and guardians were present. We were surrounded by wonderful autumnal colours and as we stood at the highest point of the site, even though the evening mist began to descend, we could see for miles all the wondrous landscape of West Penwith. 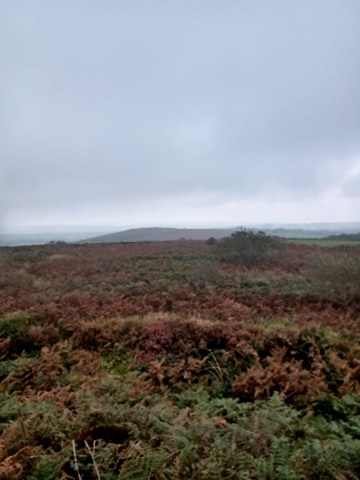 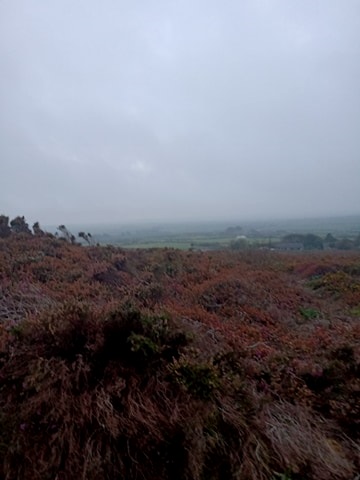 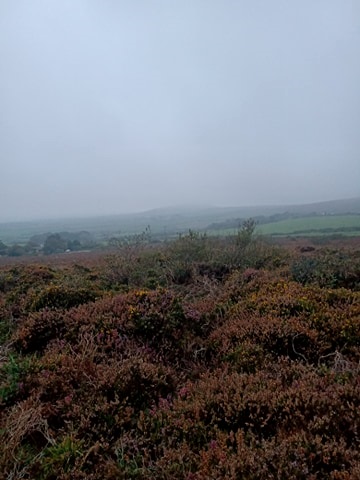 We returned to Cassandra’s cottage and enjoyed a well-earned rest by the hearth, discussing our experiences of the site while indulging in Cornish mead and warm home-made crumble. 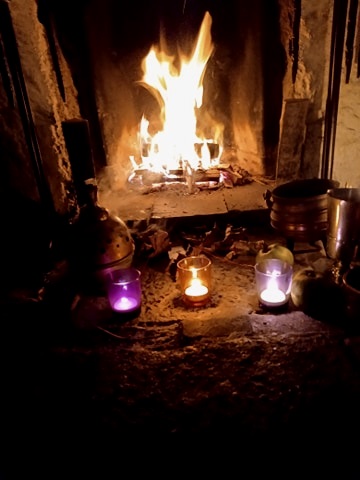 We sat by a blazing fire enjoying a small, meaningful equinox celebration, toasting the ‘powers that be’ and hoping that the changing season will bring a positive outcome to the problematic situation we face. We also hope that communities will work together, caring for one another and our environment. This was a perfect end to an energetic equinox!