It was on 26th June 2009, that I first ventured onto the streets of Penzance for my Teazer performance under the tuition of Cassandra Latham Jones. I had previous experience of Morris dancing and performed at various folk festivals, however I mistakenly assumed the role of Teazer could be something similar.

It all began with a telephone phone call during November 2008 from an acquaintance who asked if I would be interested in training for the role of a Teazer. She briefly explained what it would entail and I agreed to try, as it would also provide an opportunity to join a community event after recently moving to Cornwall. I had visited the home of this particular acquaintance and their partner on a few occasions during the time they were creating one of the new Penglaz ‘Osses as the original ‘Oss had retired. They were extremely excited about this project and I witnessed the gradual development of the new Penglaz’s creation. It was the first time I had seen a horse’s skull and heard about the folk tradition in which these skulls were utilised. Cassandra contacted me soon after hearing of my interest and invited me to attend the 2008 Montol festival near the winter solstice, so I could observe her first performance with the new Penglaz.

The acquaintance who introduced us was also a photographer for the event and suggested I wore a mask and dark clothing in the procession that evening, as the majority of people wore in ‘mock formal’ attire.

On arrival I joined the back of the procession at St Johns Hall with my former husband and son. When it began, I made my way to the front to observe Cassandra’s performance. Penglaz the ‘Oss did not appear during the first procession so I concentrated on Cassandra’s movements as she marched at the front of the band in time to the music, while waving to people who lined the streets. On our arrival at the hill fort we stood around a large fire beacon to warm ourselves and then visited a pub with the photographer, her partner and another friend of theirs. 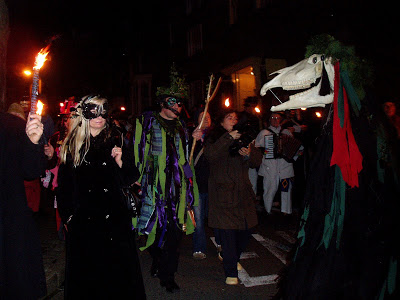 The crowd seemed to increase in numbers for the second procession and once again I followed them at the back with my husband and son, then gradually moved to the front.

Cassandra and Penglaz appeared out of an adjacent entrance to a restaurant in Chapel street and were welcomed by the enthusiastic cheers from the crowd. The energy was wild and exciting. 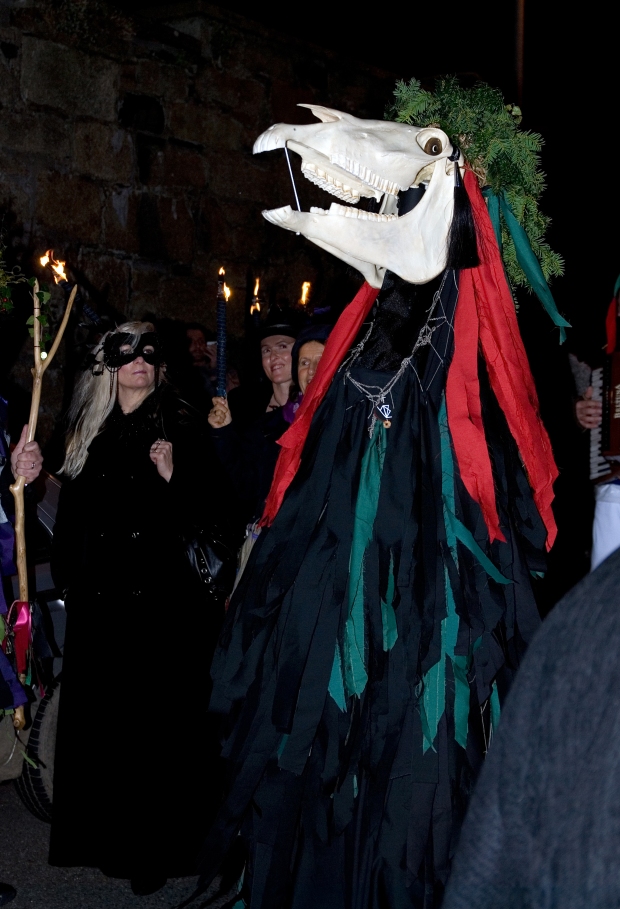 When I previously performed at festivals with my former Morris team, I was one of many performers, but on this occasion it was a little disconcerting that Penglaz and the Teazer were the main characters and focus of the event. There would be greater pressure on this performance and I voiced my concerns to the photographer who assured me it would all have a positive outcome.

During my interview with Cassandra on the 26th January 2009, I was informed of a second Penglaz and an ongoing disagreement between the other rider and Cassandra, but she assured me I would not be involved in this matter. Cassandra and I met regularly for practices at a yard owned by an engineer known to the photographer. My son and husband both rode Penglaz and each of them had a unique interpretation resulting in varied personalities of the ‘Oss during each performance. 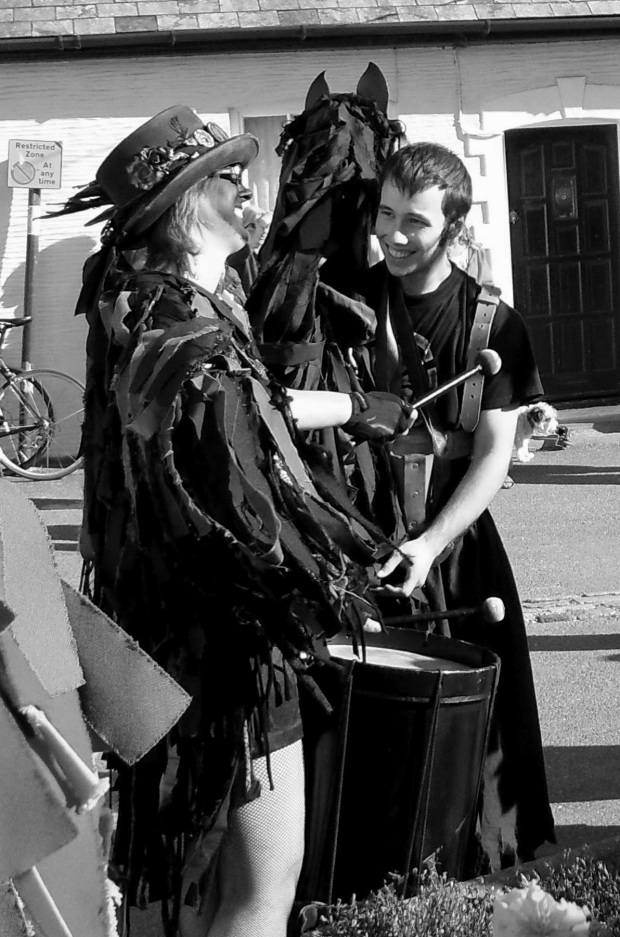 My former husband gave Penglaz a cheeky character, while my son being only seventeen years of age at this time was unpredictable, mischievous and Cassandra says he was and still is the fastest ‘Oss rider she ever had!

Although I was an experienced dancer, I needed to develop a connection with a completely different type of energy to perform this role. Cassandra sent me explanations  and descriptions of the Bucca elemental (of the sea and storms) spirit that works through the ‘Oss and Teazer. 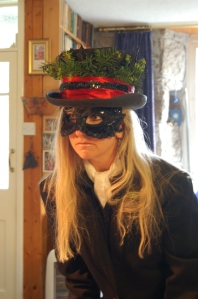 I modeled my Teazer kit on the one Cassandra wore, as the Teazer ‘cross dresses’ to represent the ‘male and female’ aspect and ‘topsy turvy’ Cornish energy. Cassandra attended a ‘guild meeting’ and presented its members with video footage of our practices, announcing I would be her apprentice Teazer and apparently it had the guild members’ approval.

My first appearance was on Friday 26th June 2009 on Mazey Eve. My former husband volunteered to ride Cassandra’s Penglaz (the one and only time) and we were understandably a little nervous on our first appearance particularly within a community we were unfamiliar with. (On reflection I am sure many were wondering who we were and why we had been placed into a ‘lead role’ within their community festival!) Just before the performance I was instructed to wait for Cassandra outside a local inn while she attempted to locate someone. A local man approached me asking why I was there and when I explained, he stated that I would never be as good as Cassandra and continued to tell me how long he had known her and revealed rather personal details about her life! What an encouraging start to the evening!

We prepared ourselves and Penglaz in a room at the Barbican and Cassandra stood at the open top window waving at the gathering crowd who were cheering and looking up at her. We made our entrance from the large black doors to lively music provided by the Golowan Band and cheers from the crowd. Mazey Eve is a wild celebration and extremely crowded, so keeping near Penglaz and making one’s way through the crowd is quite a task!  I watched Cassandra closely and on many occasions our movements were identical which boded well for future development.

Cassandra imbued a confidence and connection with the ‘Oss during her seventeen years of Teazing and it was something that would also develop within me after years of experience. One’s reflexes need to be quick due to the unpredictable behaviour of the ‘Oss and the crowd.

The Teazer’s role is to attempt to control the crowd as well as keep an eye on Penglaz, making space for her to move around and protecting her from over-enthusiastic intoxicated revellers, who step into her path, or attempt to get too close as this could result in injury. There were specific signals Cassandra used to direct Penglaz, to laugh, dance and also stand still if needed. The stomping and snapping move of the ‘Oss is one that takes practice as the timing of snapping the jaw and stepping need coordination. My son Rhys accomplished this move quickly and with a spectacular result.

After my first performance as Teazer, I received some positive feedback, plus a few criticisms from one, who thought I should teaze the ‘Oss in exactly the same way as Cassandra. At first I could not understand what he meant, however after years of experience I understood, as he advised me to watch Cassandra’s feet. Mine now move in the same way as the energy has ‘grounded’ within the performance.  Another person did not agree with two Teazers being on the street instead of one, but Cassandra explained it was the best method for training. Whatever their viewpoints, I knew that I had done a good first performance for someone with no previous knowledge or experience of ‘Oss Teazing.  My role with Cassandra and Penglaz in Penzance continued for two years and then we left the festival over further political issues. (See Original Penglaz Reinstated). I was relieved to be out of this situation within the Golowan festival, as it allowed us freedom to perform in our own way.  After leaving we re-named our ‘Oss Penkevyll and our Guise team Boekka.

Boekka has had three changes of colours, image, performers and riders throughout the years, however what remained constant was that Cassandra and I remained united as Teazers. I performed alongside her for eight years and then, after 25 years of Teazing, she handed on the role of head Teazer to me.

My Teazer role has developed over the years and the strongest connection and change occurred at the All Hallows Gathering in 2016 after my release from a situation that was, on reflection, draining the energies. The Teazer role needs total focus and I discovered dividing my energy between Morris dancing and Teazing did not work well.

I now have two apprentice Teazers as well as new ‘Oss riders. All are doing extremely well and Boekka is going from strength to strength. This year is our 9th year of performance (as our team first formed while our ‘Oss was still Penglaz during 2010). I also own and ride an ‘Obby ‘Oss by the name of Morvargh (Cornish for Sea Horse). 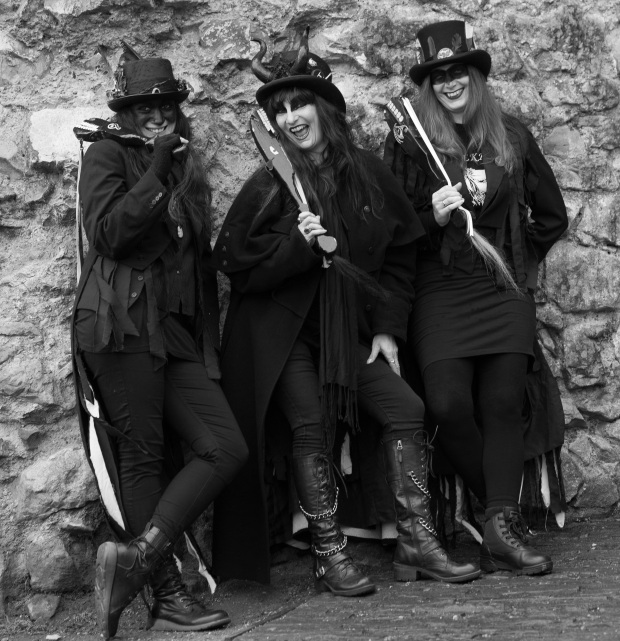 I have learnt some valuable lessons in the last ten years and am not the same person who moved to Cornwall eleven years ago, but I have some fond memories of those early days.

Cassandra also asked me to mention that I am the ONLY Teazer she has taught and I am proud of this fact.

It has certainly been an eventful but rewarding journey!