Our final workshop for 2018 was the Dark Arts. This one was introduced this year and proved to be popular as both of these workshops were fully booked. In all our workshops the women usually outnumber the men, but on this occasion it was quite the opposite. 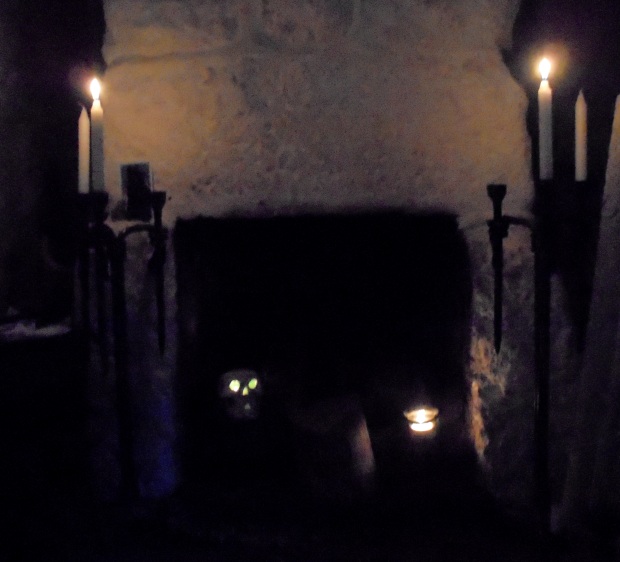 Our Friday introduction evening was unique, in the past we had one or two group members who did not partake of alcohol for their own personal reasons. On this occasion the group were all staying at local accommodation so all of the group partook of alcoholic beverages. This lead to an extremely interesting evening of discussions and debate on the subject of the Dark Arts, Christian beliefs and ethics. I was impressed how each individual point of view was listened to by others even though they were not necessarily in agreement.

During Saturday afternoon, Cassandra spoke about the subjects of Curse Breaking, Curses, Spirit Possession, Image Magic, Dark Deities, Haunting, Psychic Vampirism and Psychic/Magical Protection. Cassandra knows her Craft well particularly when it comes to Curse Breaking and Curses. She is indeed an adept and gifted person to learn from.

It is important that people receive the correct information on these subjects particularly if they have reason to utilise these methods. Movies, books and some Occult Practitioners can be trapped in the world of fantasy which can mislead many and provide incorrect information. At least there are practitioners like Cassandra that one can approach who deals with reality and provides insight to others on their level of understanding. There are a multitude of aspects to this subject and it would be easy to spend a whole weekend if not longer discussing them as the hours passed quickly.

We then spoke of mischievous spirits and the need for ‘spirit house’ constructions. Spirits have a fascination for intricate objects which can be a distraction from ‘mischief making’.

At our last Dark Arts workshop group members attempted to construct a framework for their spirit house by using wire, but trying to use wire cutters and dealing with the sharp edges could be hazardous. On this occasion we provided them with a small ready-made framework and various threads,ribbons, beads, stones etc so that they could begin constructing a small spirit house.

I guided the group through their personal constructions, offering suggestions if they had difficulties and checking they had everything required. 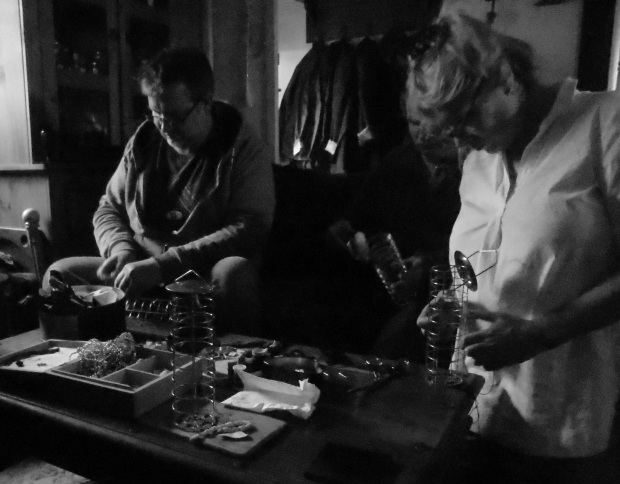 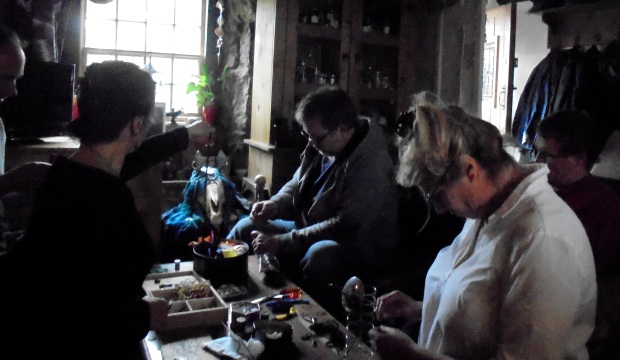 Due to the intricacy of the spirit houses group members could only begin their designs in the time available, so they would need to continue their work on them at home.

During the evening we prepared a group spell for crossroads magic. We then visited a haunted location: Carn Kenidjack. You can read the folklore legend of it here.

On our previous visit to the site during our June Dark Arts workshop, it was dusk and we could still see the various paths to it despite the thick mist that appeared on our arrival. This time it was extremely dark and cloudy, plus we were in the dark of the moon phase, as you can see by the following photograph.

It was a cool breezy evening, we stood for a while looking out over the moor and the distant lights upon the horizon over the sea. Each member of the group sensed various spirit presences that accompanied us.

On leaving the Carn, we were seriously ‘Piskie led’ and taken along various paths within the darkness by Cassandra only for them to lead us further away from our destination. We then followed the tracks made by vehicles until we reached a farmhouse gate and discovered we were on the opposite road to where we needed to be and then walked at least 2 miles to return to the North Road. Our group members were in good spirits, joking about the situation as we walked. 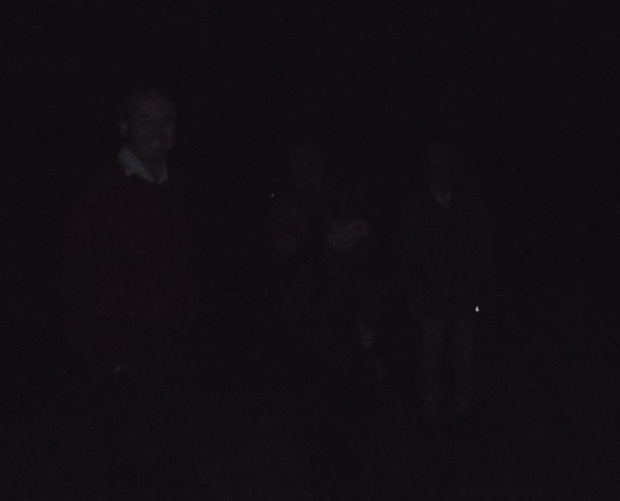 The crossroads were also extremely dark (above photo), the group were still eager and full of the energy to complete the spell we prepared earlier. Conjuring a spell at a crossroads especially when the road is busy with traffic, adds to the intensity of the work.

We returned to the cottage for libations while discussing the group’s impressions and thoughts on the Carn and spell work.

It was a most enjoyable workshop with deep minded experienced group members that I hope we will meet again in the future.

“Going on the dark arts course was very interesting. Laetitia and Cassandra have great knowledge. We made a spirit house and learnt how spirits enjoy puzzles. The walk in the evening was amazing and my favourite activity as I love nature. I felt really connected. Overall a fantastic weekend of good people and I left with a better understanding.” P.O.

“I really enjoyed our couple of days and got a lot out of it. It was great to spend time with you and Cassandra and also to meet others and hear their different perspectives on the craft.  In particular, I loved our night-time walk and crossroads spell, working on our spirit houses and learning about the different levels of psychic protection – several of which I have used before. I’ll also keep an eye out for the next series of workshops which I’d like to attend. Look forward to seeing you again soon” A.C.

“This was a great workshop I met some awesome people. Cassandra and Laetitia were amazing hosts. I learnt a lot from the discussion during the first half of the afternoon. Later I learnt how to make a spirit house and how they work. The evening was awesome, we were taken to a breath taking location. On the way back we were ‘piskie led’ and thought it funny. Thanks again ladies you are amazing!” N.W.

“Perhaps it is an understatement to say how wonderful it was to be in the company of Cassandra and Laetitia again on the Friday evening of the workshop; getting to know them again, getting to know new travellers on the path and rekindling acquaintances with some old faces. In the relaxed yet haunted atmosphere of their cottage, we heard each other’s story and began to build the group egregore that would carry us through a weekend of intensive learning and experience.

The Saturday afternoon began with a conversation that centred on the nine levels of psychic self-defence with practical examples provided both from history and from the current practice of the cunning folk. Such material is learned in the hope that one never has to put such knowledge into practice. And yet, as a practitioner, I am glad to have such techniques as part of my “tool kit” of the trade.

This was followed by a demonstration on how to build a spirit house. Like most folk, house spirits get bored, and when they get bored they can get up to mischief. A spirit house provides them with a safe space where they can work out their mischief in a controlled environment. In return they provide safety and protection for the house’s other occupants (human and non-human). Metal frames and other materials were provided and despite my complete lack of crafting ability I was able to come up with the rudiments of a spirit house – a work in progress that will continue to evolve for some time yet!

Dusk gradually made its presence felt. And it was in the gloaming that we began preparations for a crossroads banishing ritual. We gathered our intent and poured it into the materials of the spell in the sacred hearth space before heading out into the night.

We walked into the night, deep into the Penwith moors and began climbing a hill to a dark rocky outcrop of granite boulders. “What can you feel”? “What can you see”? were the questions that ran through the experience? In the darkness of the black moon, I stretched forth my senses and saw flashing lights, here and there; so brief that one could almost doubt their willow-the-wisp existence. I saw moving shapes and running forms; some humanoid in appearance, some not so distinct. And when I touched the granite of the Carn, I felt a power, ancient, wild and free; and I knew that this was his land.

The walk down the hill was less determinative, more meandering, more uncertain; a delicious “being lost” and “abandonment” as we lost our way, being (mis)lead by the mischief of the Piskie Man and ending up miles from the cross roads where we were to complete our rite.

Yet find it we did, and in that most in between of places we raised our energy and called our power and shattered the vessel of our desire; its energies racing forth into the dark night to do our will.

And back by the sacred hearth we learned of the local lore of Carn Kenidjack; of the Man-in-Black who chases the night wanderer until he or she reaches a certain stile, of the Piskie Man who misleads and of the witch who guards a well that is sometimes present and sometimes absent. And it is in this ‘between the worlds’ of space and time; this experience of “the hedge”, the crossroads, that magic is alive and powerful.

And then it was time to say farewell to our two friends and guides. A farewell – yes- but a farewell with a promise to return to this most magical of hearths and its two wise guardians who will always have a place in my journey. T.N”