The weather in Cornwall has been fabulous, we have had constant tropical temperatures and sunshine for over a month now.

This weekend we welcomed a group of four people to our workshop. Two have attended workshops before, one had consulted us in the past for a reading and the other we met for the first time.

During out introduction evening, it is intriguing to listen to each person relate their life story and spiritual journey. This leads on to discussions of many spiritual subjects and at times these conversations can divert onto others. When this happens we gently guide it back to the original theme while at the same time we obtain helpful information about our group members.

It was too warm to light a fire in the hearth, so we lit additional candles on the threshold of the fireplace.

On Saturday I prepared the hearth and for this particular workshop I have the pleasurable task of searching through my sea shell collection in two large glass containers for various types of shells, pebbles etc. for discussion. 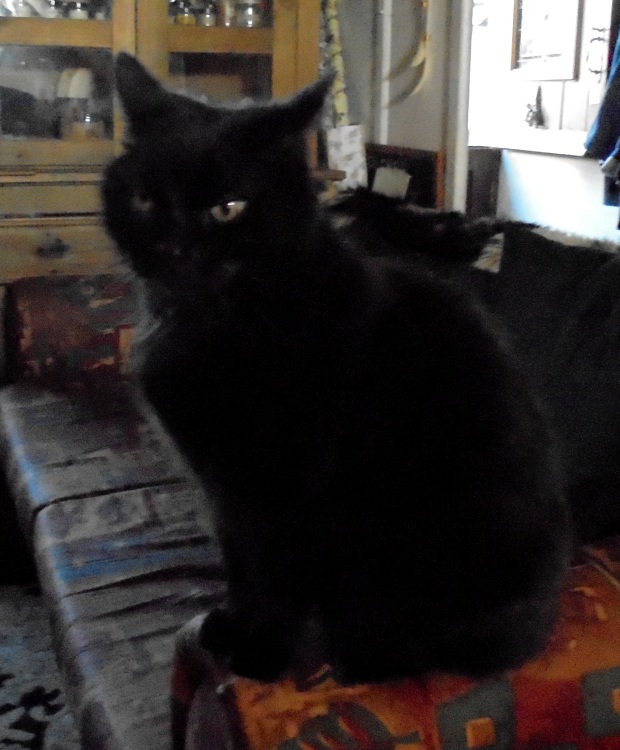 I was observed by Clutterbuck who reacts to the sound of clattering shells and knows that work is afoot when the hearth is prepared. 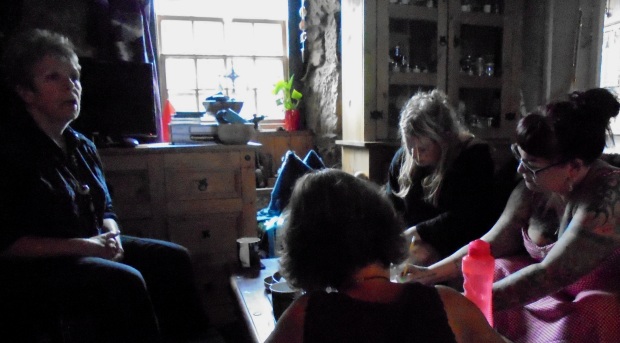 Cassandra took the group ‘back to basics’ on this occasion due to discussions from the previous evening and she explained the ‘four powers of the witch’.

The group were also given an exercise for focusing the mind. This exercise provides insight about each member of the group while observing the way they work and their reactions to it.

After this exercise they were each given a Tarot card to study and the opportunity to relate to the group what they see within the card rather than the meanings they may have read in Tarot books. This exercised their powers of observation and once again gave insight as to their development.

The group members were eager for the Sea Sorcery part of the workshop. We discussed the history of sea witchery, how they utilise the elements in their work as well as the hidden and unpredictable powers of sea spirits. 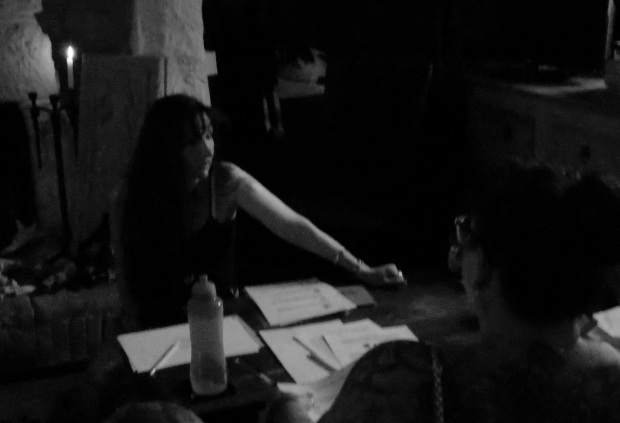 The group were fascinated by the discussion on shore life and the vast variety of sea shells, their uses around the home, worn by people as adornments and in charms and spells. I passed some of the shells around so each person can feel their energy and the ones that may resonate with them. 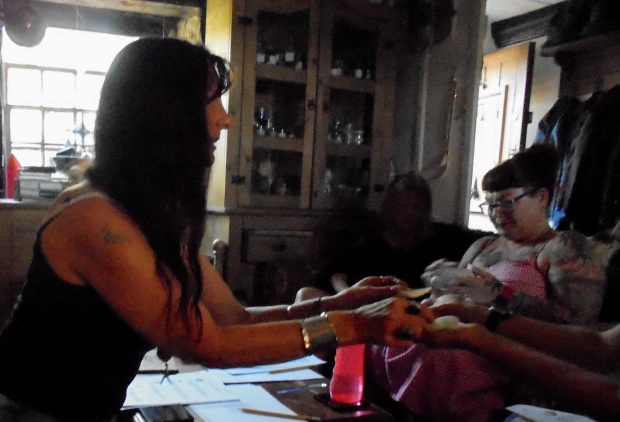 I introduced the concept of ‘mermaid’s purses’  ( cases for dogfish eggs) and how they are useful containers for ‘sigil’ spells.

We also discussed the vast subject of pearls. their production and their magical uses.

The group members were then inspired to begin their own shell collection.

On Saturday evening when the group returned to us they were shown by Cassandra how to construct Sigils. These were used by the group for their personal sea spells. They were given a choice between using a flat oyster shell or mermaids purses. We blessed their spells at the hearth and as the sun began its descent we visited Sennen Cove to work by the sea on a beautiful summer evening.

Cassandra built a small fire and one of the group collected some sea water. 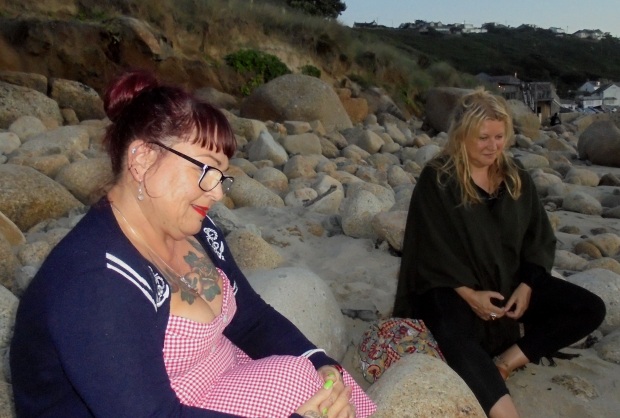 While Cassandra tended the fire I took the group out to the sea to connect with the sea spirits before our spell work.

Although they are hard work, the workshops are a pleasure to do and deeply satisfying. We hope that our group members have taken away useful information that will become a part of their spiritual journey along with some wonderful memories of the weekend.

“One of the best workshops I ever had; thoroughly enjoyed every minute of it.” G.B.

“I’ve lived by the sea my whole life and always known it’s power, however this workshop showed me how to connect and give thanks to the spirits of the sea and the meanings of the objects from it to create charms and how these charms were used past & present. Laetitia and Cassandra are incredibly knowledgeable and giving, as were the other group members. It was an amazing workshop, we were blessed with great weather and a new moon. Thank you for an incredible weekend” C.R.

I attended the workshop on Sea Magic and have to say it was amazing. Living inland I never get the chance to do any sea work and have never understood how to use shells, tides. This was all explained by the workshop in the afternoon when Cassandra and Laetitia demonstrated how to make sigils and use them in spells. We were then given insight on the lore of the sea and how to use items found on the beach when spell working. This is my second year attending their workshops and I love them. N.W

One thought on “Sea Enchantment and Divination Workshop July 2018”